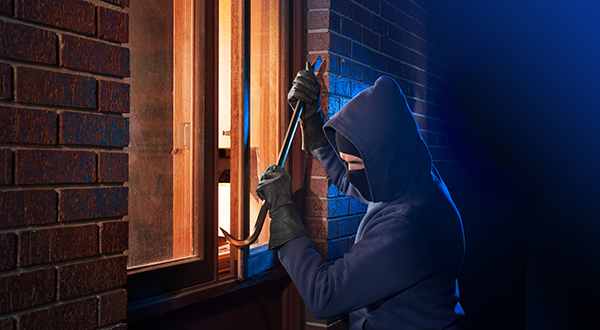 Unseemly as it may be, home burglars treat their crime like a trade and take preparations long before breaking into a home. Selecting a target is their first step. So how do thieves decide which house to rob and which to pass up?

Open blinds. Don’t put your electronics, jewelry box, or extra car keys on display for anyone who looks through your windows. By being able to map out where everything is located, a thief knows he can plot out break-in and get valuable items. Close the blinds, particularly in rooms with expensive possessions.

Toys in the yard. Toys usually mean there’s a mother in the home, and she probably has jewelry. Additionally, if the toys are for older children, it’s likely they have a video game system. Keep your yard clear, especially during the week when you’re not home.

Hidden spare keys. You aren’t fooling anyone by hiding an extra key under your doormat. Letterboxes are not a clever hiding place, either. Burglars know to check the obvious concealed places near a door. Avoid leaving a key outdoors if at all possible.

Cracked open or unlocked windows. A window raised slightly off the ground may not seem like one could climb in it easily, but a step ladder only takes moments to set up. Be wary of leaving windows open for ventilation while you’re not home, and lock them every time you close them.

Lightweight wood doors and simple deadbolt locks. One swift kick can knock these doors open and the thud it makes won’t be quite as suspicious as breaking glass. Invest in a thicker door, and consider opting for metal.

Clues in your trash. An empty box for a 60-inch LED TV in a trash can probably means there’s a shiny new TV inside the house. If you buy something expensive, take the packaging straight to a dumpster.

Night entry. Often people are more afraid of break-ins at night, but most occur during the workday. Don’t skip precautions during daylight hours.

High fences and locked gates. Entering the rear of the house is usually the easiest and least noticeable way to break into a house. Having a secure backyard further reduces the options for finding a way in.

Activated burglar alarms. When choosing between a house with an alarm and without one, it’s much easier for a thief to opt for the house without the security system. But make sure to turn it on! If you do forget to close your blinds one day and the panel is visible from a window, you don’t want anyone to see your high-tech burglar alarm sitting unarmed.

Lights, as sign of activity. Burglars want to get the goods and get out. Their operation doesn’t work well if someone is in the home. Leaving lights or a TV on can discourage them. Some homeowners shut all curtains completely when they go on vacation and burglars know this. A good strategy to use when going out of town is to leave a curtain cracked where no possessions are visible, but a single interior light can still be seen.

Cars in the driveway. Similar to lights on in a home, a car in the driveway is a sign that someone might be home. That’s a risk thieves rarely bother to take when the dark, empty house next door might be an easier option.

Changing just a few of your habits and choosing new technology like hard-to-disable wireless monitoring for your burglar alarm can severely limit your chances of becoming a victim of a break-in. Follow the Fortress Security blog on Facebook, GooglePlus, or Twitter to get more burglary prevention and home security tips.